2 - A spy from the Empire of Frisca looking to recruit agents to aid him in his efforts to keep an eye on Westlund.

5 - A delegation of sycophantic Westlund Seaxe nobles (1d6+2 Ealdormen) on their way to toady up to King Cyneric (one is a spy for the true King of Southlund).

6 - Cyneric’s Warband (1d6+3 Sperebrógan, 3d6+3 Fyrdmen, 1d6+1 Hýransweord, 2d6 Thegns, 1d3+1 Ealdormen, 2 Hearthweru) Led by a Gesith who is blood kin to the king (and quick to let everyone know it). They patrol the kingdom and scoop up anyone deemed “interesting” to take back to the King so he can question them in person.

7 -  A gang of rowdy Hýransweord (1d6+2) on their way to seek service in Cyneric’s Warband. Arrogant and argumentative half of them are already embroiled in blood feuds in their homeland.

8 - An angry Hearthweru (from a random kingdom) given leave by his lord to go to Westlund and pursue a blood feud against the Hýransweord that killed his brother.

9 -  One of Cyneric’s many spies looking to recruit agents to hunt down spies in the kingdom.

10 - A spy (from any of the other kingdoms) seeking agents to aid him in his current mission against King Cyneric.

11 - A Dweorg Journeyman Smith (Dweogas Shieldbrother) on his way to serve at the court of King Cyneric. He bears a gift of Dragon Scale armour and minor Dweogas magics. Both the king of the Dweorgas and king Cyneric will be displeased if he is interfered with. 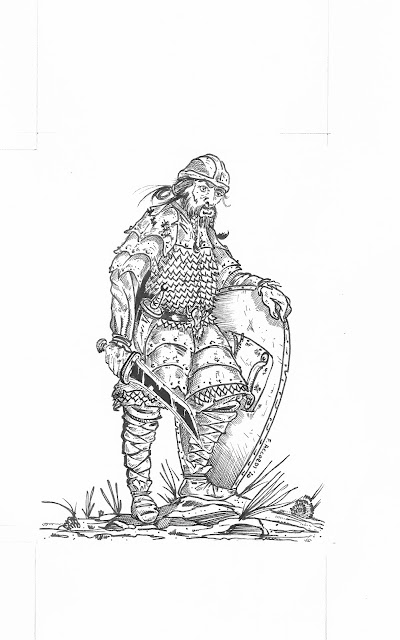