Half of my #dungeon23 scribblings are for a Megadungeon, the other half are part of the weird Science Fantasy Hexcrawl I'm working on: Bloodlands of the Sacrlet Sorcerer. Here's Room 1 of that.

The Portal Fort of the Red Hand Shreni is the point of access for any adventurers entering the Bloodlands. It follows a standardised layout used in all the Dreaming Empire’s Rimwall Forts. The portal fort is mostly intact, and recently abandoned after a blood-drenched battle between its garrison, the Red Hand Shreni, and its besiegers, the Infernal Meatmachines.

Once cleared of corpses, gore, traps, and the threat posed by the remaining wounded and dying Meatmachines, it will make an excellent home base for any expedition into the Bloodlands of the Scarlet Sorcerer.

Any expedition into the Bloodlands starts with the party arriving in the portal room of the fort.

If the party came through the portal with a source of light, they can see they have arrived on a large dais set against the far eastern wall of a room that extends beyond the 30’ range of their lanterns. The red glow is coming from several points on the north and south wall, but is not bright enough to be of much use. It is however bright enough to interfere with Infravision. From further within the room, a faint metallic scrapping sound can be heard, along with an unnatural whirring sound. There is also a strong smell of death and decay.

Floating in the centre of the room, there is a large red pulsing orb of light and crackling energy. Against the north wall, directly in line with the orb, is a large red marble pedestal on which a bronze control panel stands. Covered in buttons and dials, strange alien glyphs, and recessed niches, the control panel operates the portal orb.

Anyone moving towards the orb can feel a raw power being generated. If they reach out a hand to touch it, the intensity of its pulses increases. Anyone or anything touching the orb must save vs Death or Poison. Succes means a pulse of power sends the person or thing flying across the room and slamming into the wall for 1d4 dam. Anyone in their path takes a point of damage from impact and is knocked out of the way. If the save is failed, whatever touched the orb is disintegrated.

Operating the Orb - The Glyphs are a creation of the Scarlet Sorcerer. Until the players  learn his secrets or get help from a local with translation, the only way to read them is with a Read Magic spell.

The Glyphs, located on the left of the circle of indentations, have pictures of the different sized indentations. The small indentations are labelled - Forts, the medium - Towers, the large - Citadel. On the right is a single pull lever labelled - Engage.

Any crystal used to engage the orb is burnt out and cannot be used again. If anyone is foolish enough to place more than one crystal in a slot, pulling the lever will cause anyone in the portal area to save vs Death Ray or Poison. If they make the save, they are transported to a random location. If they fail, parts of them are sent to the various selected locations.

As a defensive measure, if a crystal is placed in the socket that represents the home location, anyone not holding the lever when engaged will suffer the same fate as anyone who tries to touch the orb.

As a last resort, loading every slot with a crystal and pulling the lever causes an explosion so powerful the entire fort will be ripped apart.

[[SIDEBAR]]The red crystals of varying sizes found in the Bloodlands are used to zip around to various key locations. As other regions of the Dreaming Empire are added, the referee can include different coloured crystals in treasure hordes that will take PC’s to corresponding locations in the five other five regions. [[SIDEBAR]]

THE DEATHDOG AND DEAD SOLDIER

DEATHDOG:The body of a strange dog like thing is caught in a device, not unlike a bear-trap in design. The creature, a Meatmachine Deathdog, looks like the metallic skeleton of a large dog. Strange vine-like red fronds weave through the frame, and within the body is a wire cage containing rotting meat, and what looks like most of an arm.

Where the heart should be is a small box like device made of a strange mixture of flesh and metal and covered with blinking red lights, where all the red fronds connect. If the fronds are studied, it’s plain to see that they are some kind of living organism. Detached from the Deathdog, they writhe and try to wriggle away.

Every so often it makes a strange whirring sound, and its rear legs kick out, scraping on the marble floor. Its head has been hacked off and is across the room latched onto the throat of a dead soldier. The thing is almost dead, and a single thrust of a weapon into the metallic-flesh heart is enough to finish it off.

If the party takes the time to pull the machine apart and retrieve the arm, there is a small red crystal held in the fist. If removed from the soldier's face, the Deathdog's head can be examined. There was a slot where a crystal, the one the dead soldier clasps in her hand, was.

DEAD SOLDIER: The most striking thing about this fallen soldier is that they appear human, but with vibrant ruby red skin, that is slightly translucent and somewhat chitinous. Like all the people of the Dreaming Empire, they are also entirely hairless. Anyone with any knowledge of healing or battle can tell she has been dead for at least two days.

This soldier is one of the Scarlet Sorcerer’s Shreni, his rank and file troops. She is dressed in tunic, trews, and sandals, and a turban. The tunic bears a badge made of red crystal in the shape of a clenched fist, the emblem of this fort’s garrison.

Laying on the floor nearby is a red crystal Kukri (as short sword counts as silvered/magic weapon). Clasped in the closed fist of her remaining hand, she holds another small red crystal.

If anyone takes at least a cursory glance at the crystal, they see it would fit in one of the six small outer indentations of the console, the indentation connecting the lights, or the locking mechanism of the bars, or the Deathdog’s skull.

The room is roughly 200 by 50 feet. Big enough for a large troop of infantry to gather here and be transported by the orb. The floor is red marble swirled with traces of white marble, the ceiling covered in red clay tiles, and the walls are red adobe.

[[SIDEBAR]] Unless stated, all the rooms of the lower level of the fort have the same red marble floor, and red Adobe covered walls. The ground floor and tower rooms are the same, but with wooden floors. [[SIDEBAR]]

The northern wall is covered in a mural. The colours are bright and vivid, anyone with a background or knowledge of art can see it is a recent addition, and not by a competent artist either.

The central figure of the mural is a Fort flying the flag of the Red Hand Shreni (this fort) its rampart manned by red stick soldiers reminiscent of the dead soldiers in this room.

In parallel, and to the left, is another identical fort flying a flag of a Red Hawk. Parallel to the central fort, and to it’s right, there is a ruined fort with a blood red cross painted over it.

To the north of the line of forts on the there are dotted what looks like huts, and unarmed red stick figures. Circling around these ‘villages’ are black stick figures resembling the Deathdog.

To the south of the line of forts on the mural are five separate formations of stick figure soldiers in the colours blue, green, yellow, orange, and purple. They are depicted as besieging the central fort, but some are also fighting each other.

There are six glowing crystals recessed in the wall 10 feet above the ground. They currently give off a dull red light. There are two each on the north and south walls, one on the east wall, and one on the west wall on the other side of the bars. They are glowing dully at the moment. A red crystalline line connects them all. On the wall near the portal console there is a slot to insert a small crystal. If one is inserted, the lights will glow bright enough to illuminate the whole room in warm red light. One crystal will provide full bright light for two days.

[[SIDEBAR]]The entirety of the fort is lit by these same glowing red lights. Each room will require 1 small crystal to power the lights for two days. Otherwise, except for the courtyard, the party will need a light source to see what they’re doing in the fort. [[SIDEBAR]]

The bars that separate the rest of the room from the stairs that lead to the only door out are set deep into the walls, floor, and ceiling. In the middle is a single door. Its lock mechanism with a slot for a small crystal. Red arc-light dances across the bars and the hum with a quiet buzzing sound.

Standing near the bars, the party can see on the other side of the bars there is another corpse, of another red soldier. This one is missing an arm from the shoulder down. He wears the same trews, jerkin, and sandals as the other corpse, but has no turban. He also wears a thick leather belt with a pouch attached. He is about 12 feet away from the bars. If the PC’s can come up with a way to get the corpse nearer, the pouch he wears holds 1 small crystal that can be used to open the barred door.

If touched, the bars cause shock damage of 1d4, 1d6 if touched with something metallic. Inserting a small red crystal in the lock mechanism will deactivate the shock effect and open the door. The shock effect will remain off until the door is shut again.

If the party used the one small crystal in either the lights or the portal console, they will have to cut the thorough bars or dig their way out, or take the smarter and easier option of destroying the door’s hinges. All options are possible, but will require time and the right tools.

To avoid the shock effect of the door, two blows with a weapon will shatter the locking mechanism. Of course, striking it with metal weapons will cause a shock. Wooden, crystal, or cloth wrapped metal weapons will not cause shocks when striking the lock. However, once shattered, it cannot be opened or locked again.

Once past the bars, there are stairs up to unlocked double doors that open to Room 2. Anyone listening at the doors can hear a mechanical clicking sound. 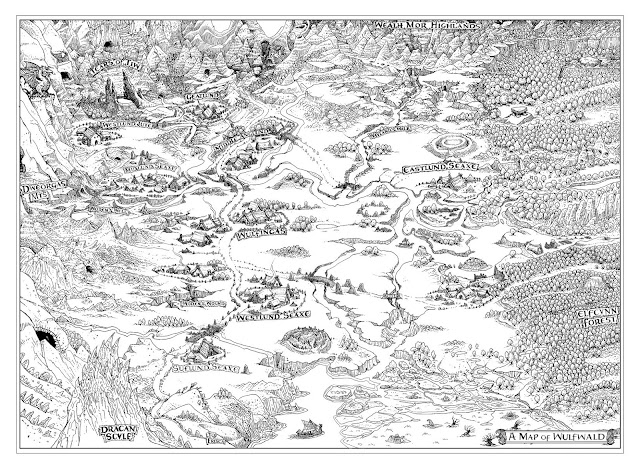